Weight weenies are spinning in their graves… 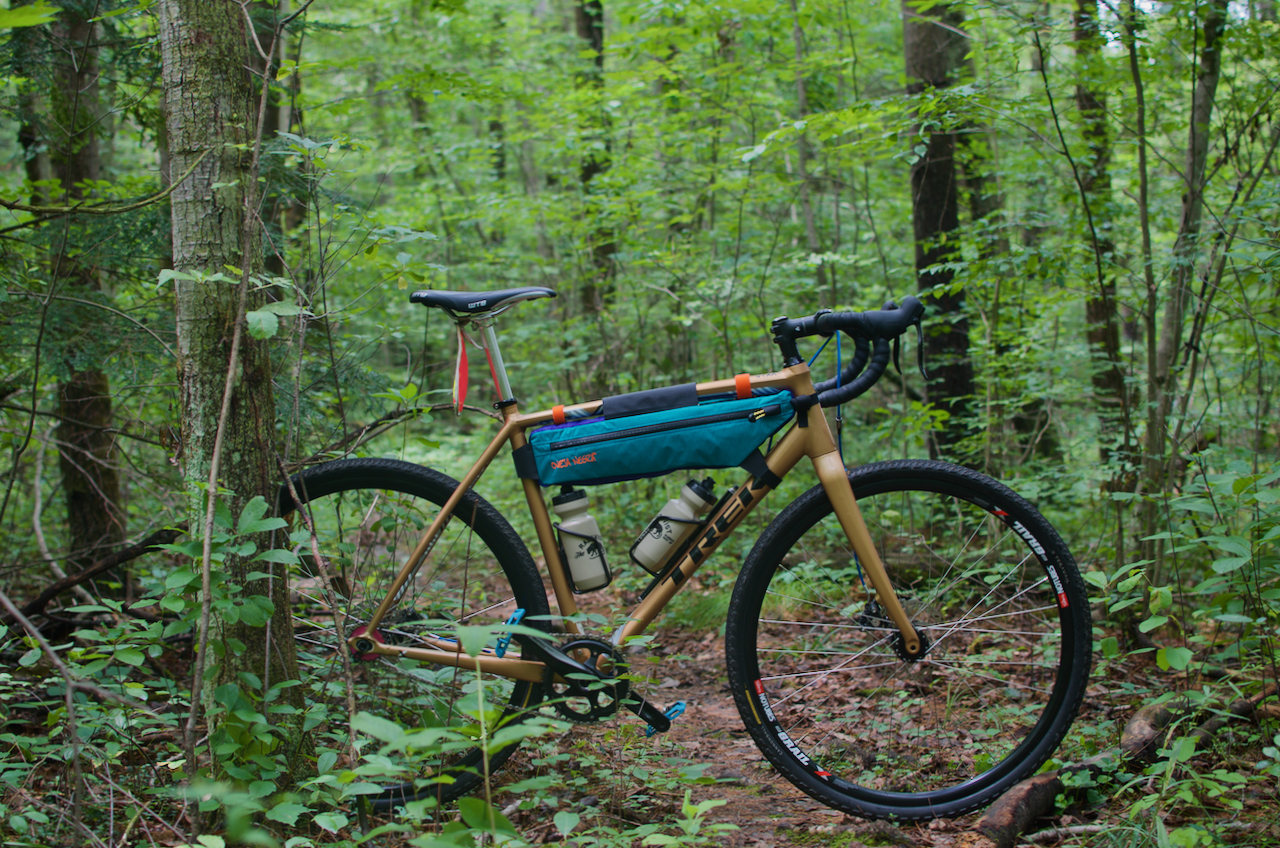 I once asked local cycling hero High Mileage Steve how he liked his new custom frame, he said “I think it’s pretty good, but I’m not sure yet. I haven’t ridden it enough.” Steve had over 10,000 miles on it, which takes him just a little over four months.

Steve is smarter than I am. With new bikes, it’s easy to get caught up in the glitz and glam, but you can’t really tell how a frame fits until you’ve ridden it a bunch. In my First Look of my All-City Nature Boy 853, I was positively crooning, but the cold, hard reality set in after a few months — the top tube was just too long.

It’s not the frame’s fault, but it kept me and that bike at arm’s reach (pun intended). I just couldn’t fall in love with it. Much sooner than I would have liked, I was back on the market for a new frame. 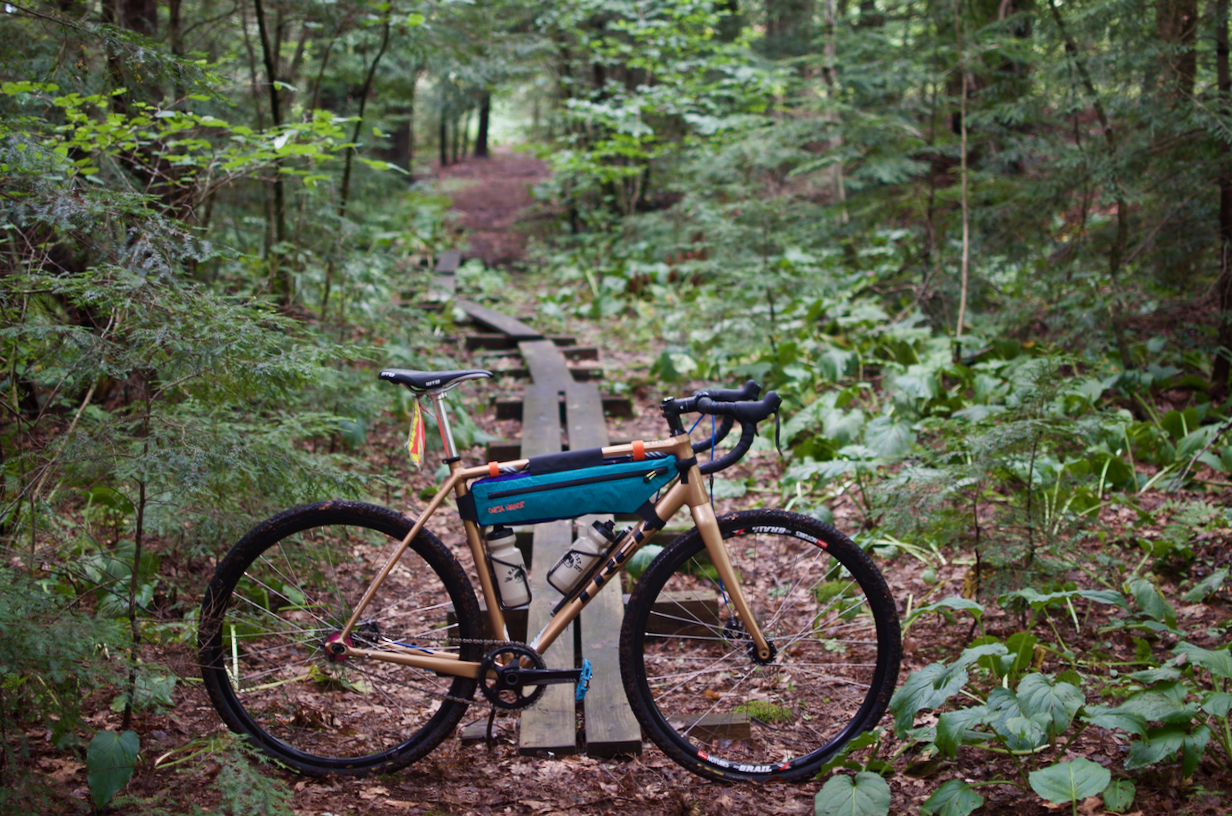 My qualifications were pretty simple; I wanted to re-use as many components as I could, and I wanted steel, and I wanted to run it singlespeed. That last part kept tripping me up. Every close contender had the wrong dropouts, and it was killing me.

Noah, a mechanic at Laughing Dog, talked me into an aluminum Trek. He loved his Crockett and — lucky me — the 2018 frame came with sliding rear dropouts. Sold. 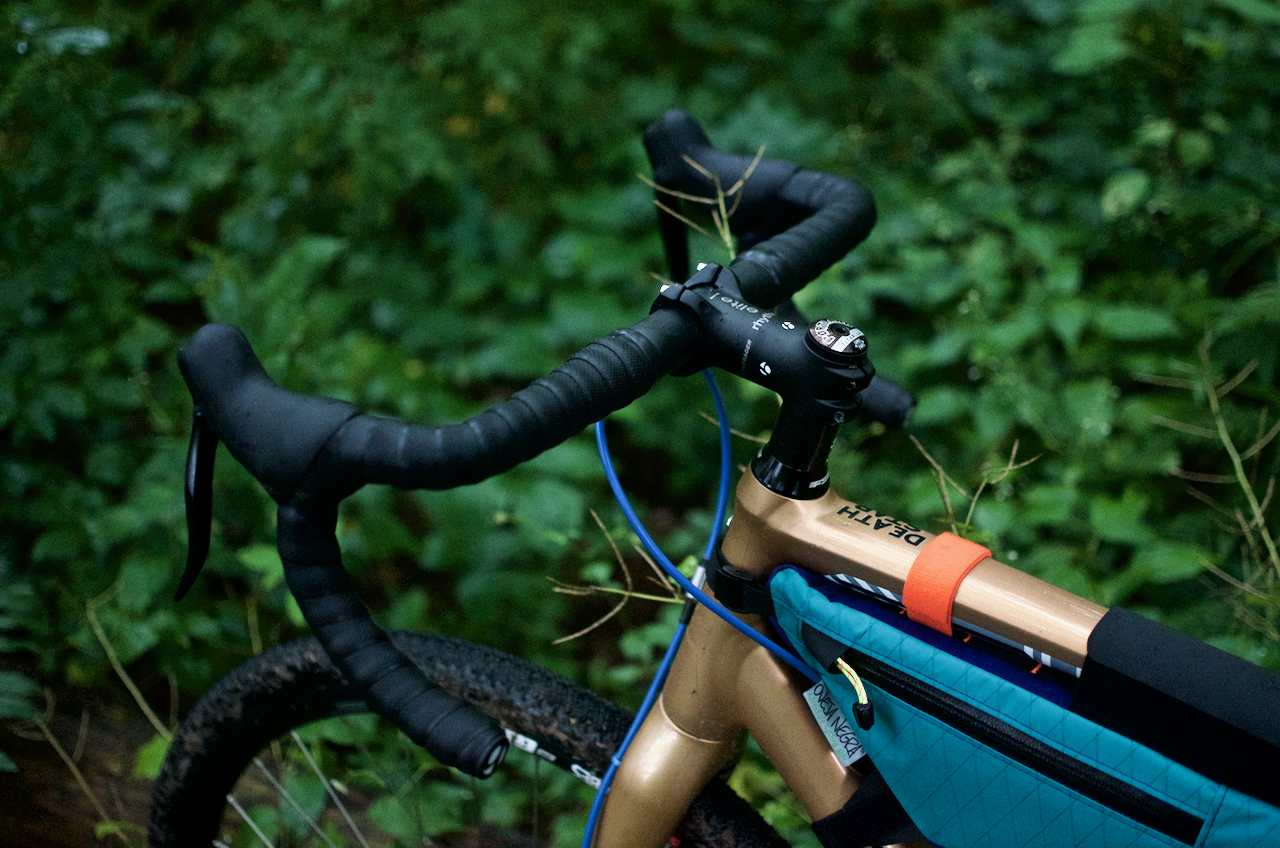 A lot of my old components swapped right over, but not all of them. This frame uses a lot of updated standards and technology. It’s on the bleeding edge of bike tech, a place I swore I’d never go… at least I have my Pugsley to keep my head out of the clouds.

The 2018 Trek Crockett has the following:

Each one of these fancy features was a pain in my rear, but I persevered, and it was worth it. 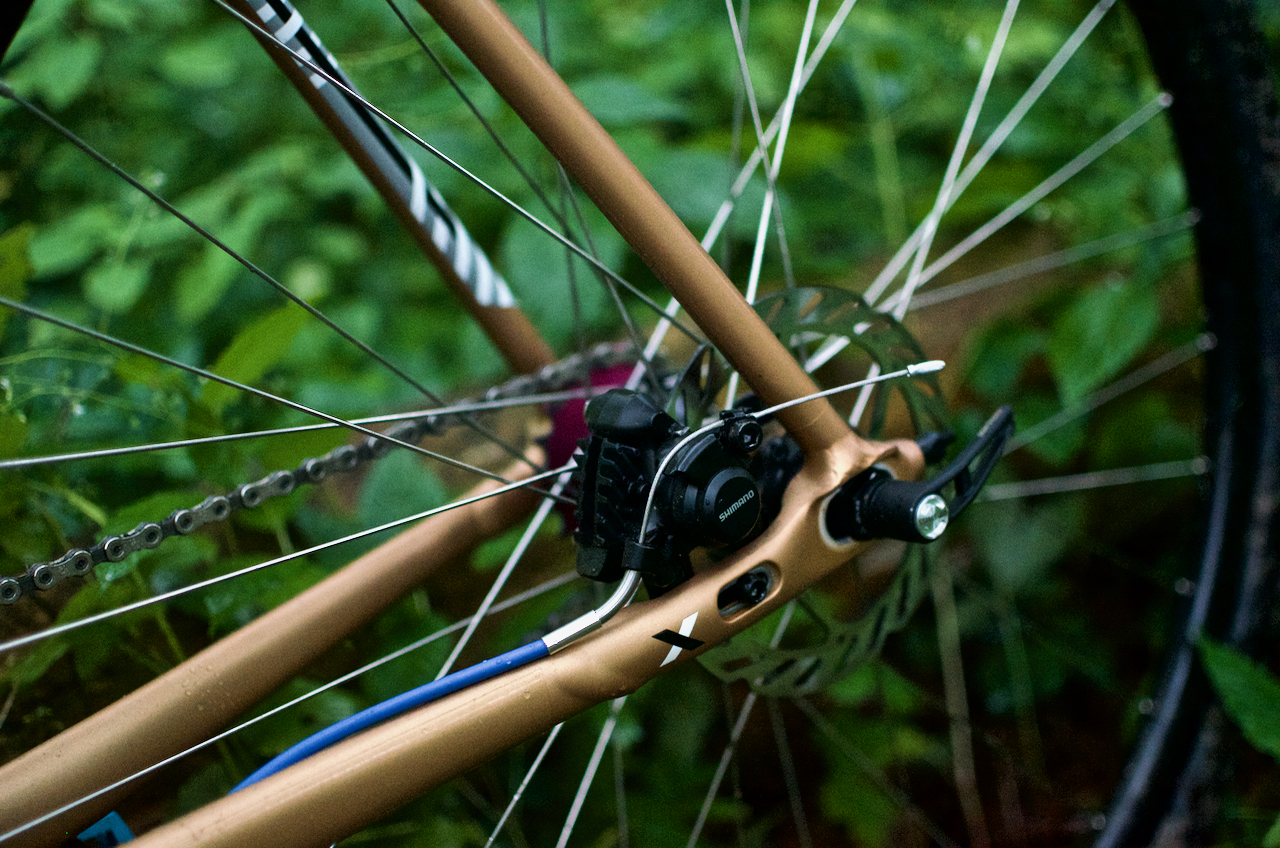 My only relation to thru-axle was the plethora of quick-release wheels on Ebay as the old standard started its death-spiral. It’s easy to find old QR mountain bike wheels with super-narrow rims if you’re building up a cross-check or something.

At any rate, having tried it out, I’m sold. It’s very easy to drop out the rear wheel for a flat tire, and it’s great knowing that everything’s 100% straight when you mount it in (no more brake rub!). And speaking of brakes, there’s virtually no disc rub when you hammer on the pedals. That wheel stays locked and you can run the pads as close to the rotor as you please. It’s quite beautiful… 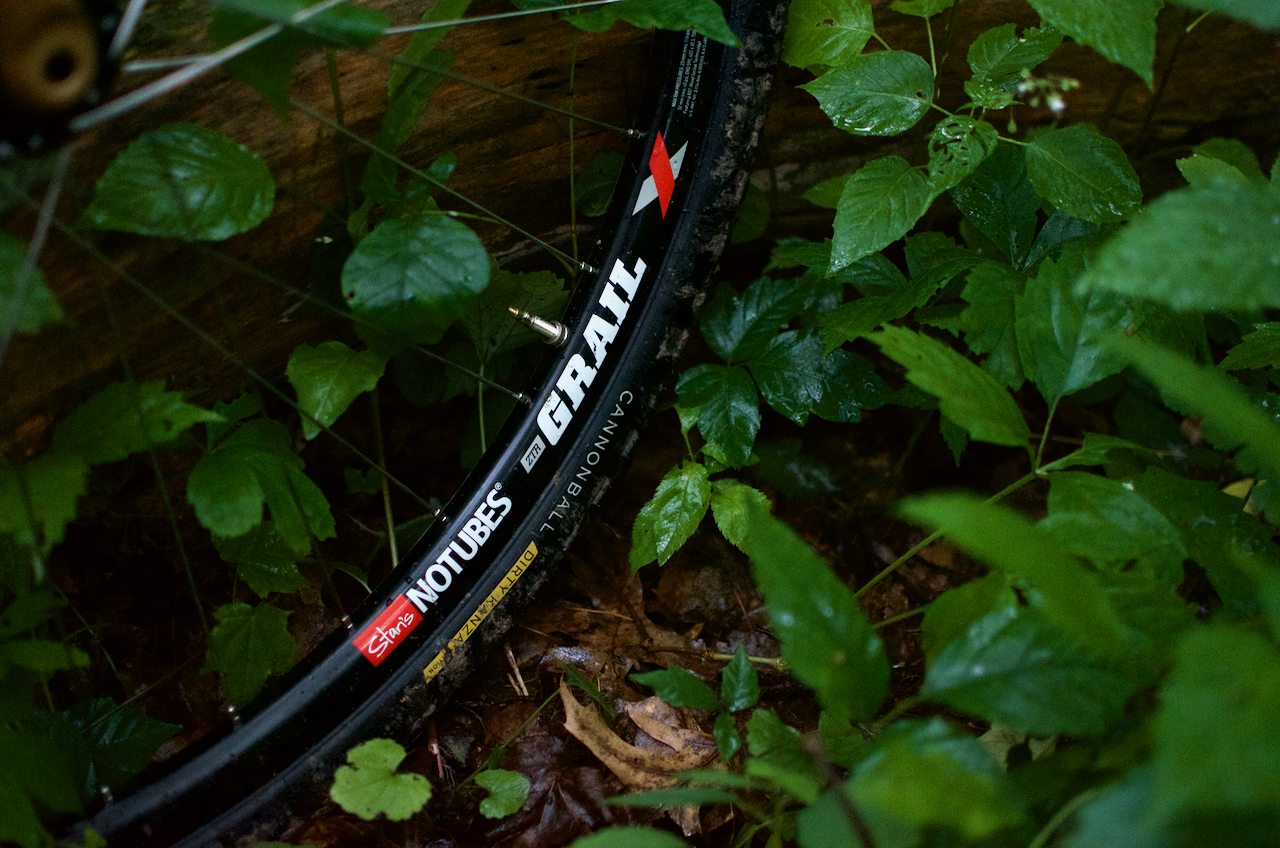 I did have to have a new front wheel built around a thru-axle hub. I now have Hope in the front and rear, and that’s great, because the hubs are easily convertible between standards. I knocked out the old axle with a plastic hammer and the edge of my workbench, with reckless abandon, and slammed in the new one using a lockring tool. Don’t try this at home. 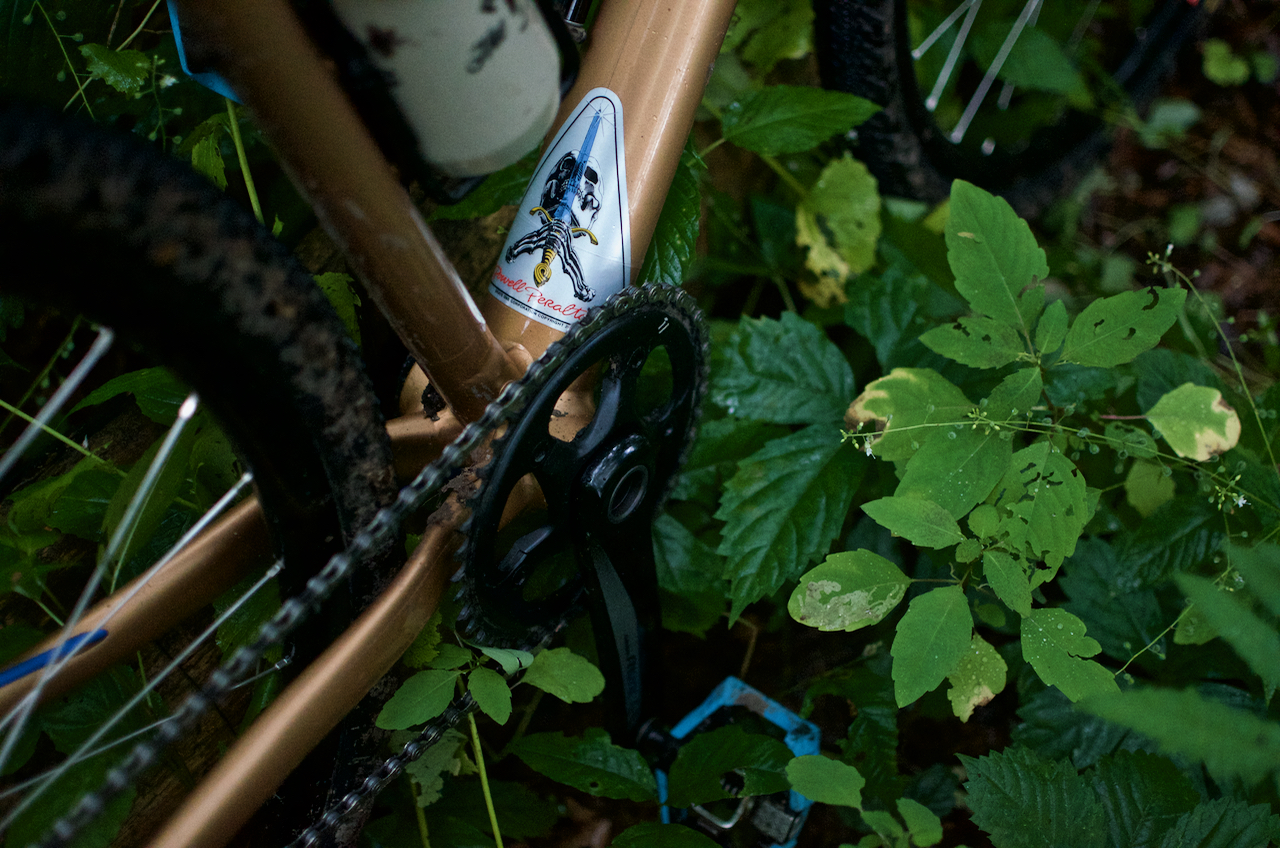 Screw press-fit. There, I said it! The press-fit was almost a dealbreaker. I don’t care how stiff the power transfer is, give me good old-fashioned english-threaded every time.

But, beggars can’t be choosers, so I used a Wheels Mfg. converter bottom bracket, which screws into the shell and lets me reuse my old boat anchor, the Sram Rival crank. 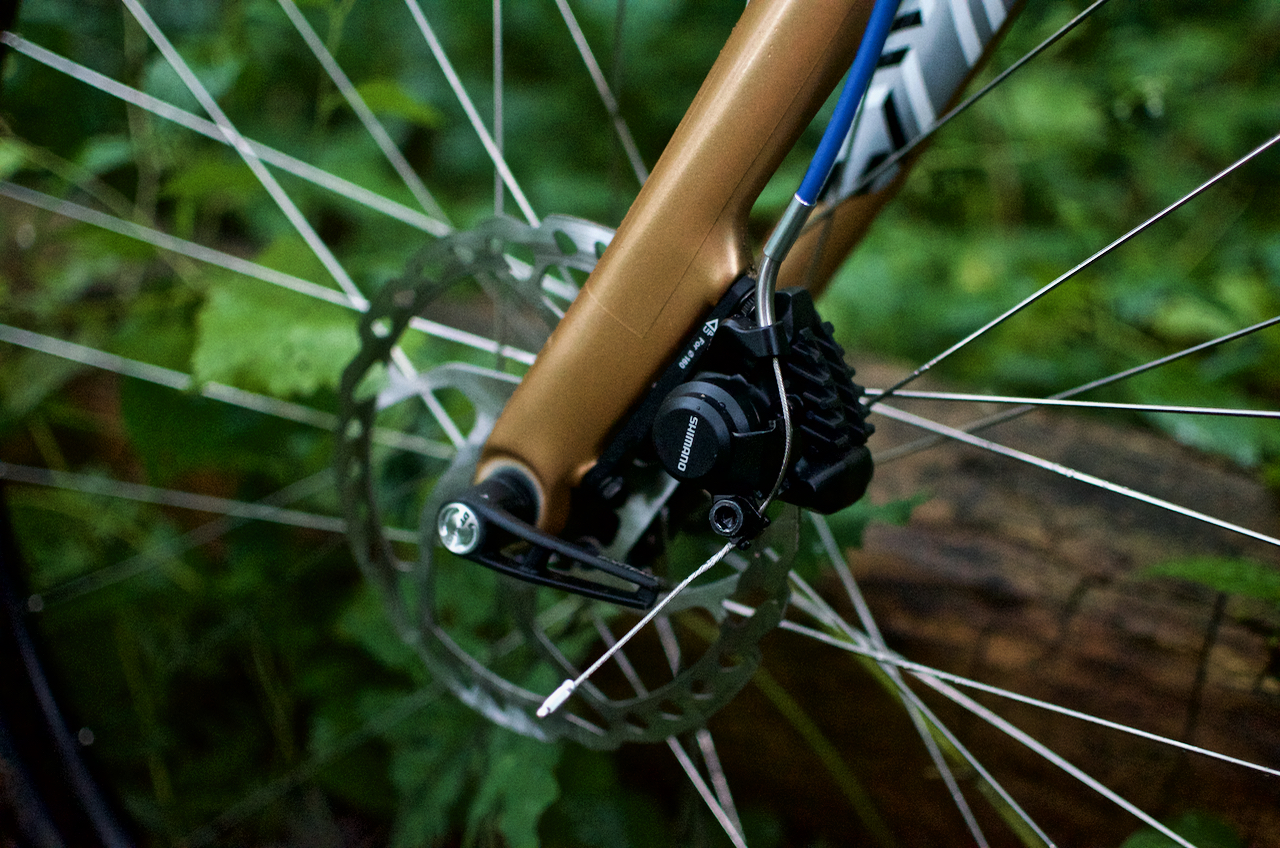 I don’t know what flat-mount is for. I really don’t. Aesthetics? Slightly stiffer brake transfer? I don’t know. All I know is, I had to buy new brakes.

My Paul Klampers eased my pain by having excellent resale value, and Shimano put on the final band-aid with their new and very reasonably priced flat-mount mechanicals. Like all Shimano tech, these brakes come with a very sexy name, the BR-RS350. The stopping power of these brakes mated to my SRAM levers actually feels a little more powerful than the Klampers. I know, I hate to say it.

Maybe there is something to all the trickle-down tech on these, which practically scream “Hydraulics.” They’re not. They’re cable-actuated like God intended. 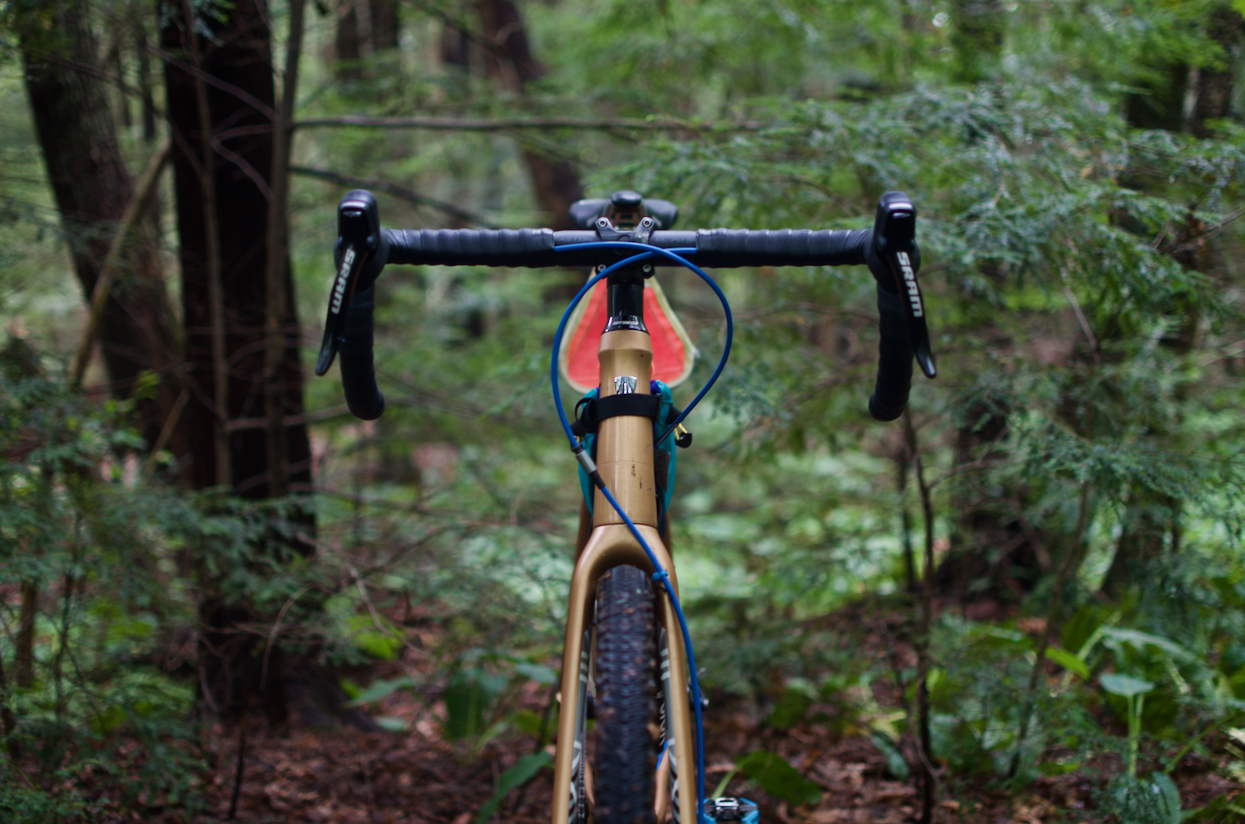 It was really tricky setting up the housing on this bike. I didn’t have to fish a cable through the frame (thankfully), but I did have to cut and size the housing to make some very tight turns. The rear brake cable goes through a bent noodle ferrule, shoots through a hole in the left chainstay, swings around the bottom bracket, through a small plastic clip, and then tucks neatly into the downtube, only to rocket back out again on the other side. It’s not the cleanest routing job I’ve ever done, but it’ll do.

The internal routing is totally irrelevant for me, of course, since I don’t race cyclocross, and I don’t think it looks amazing either. Whatever. I can deal! 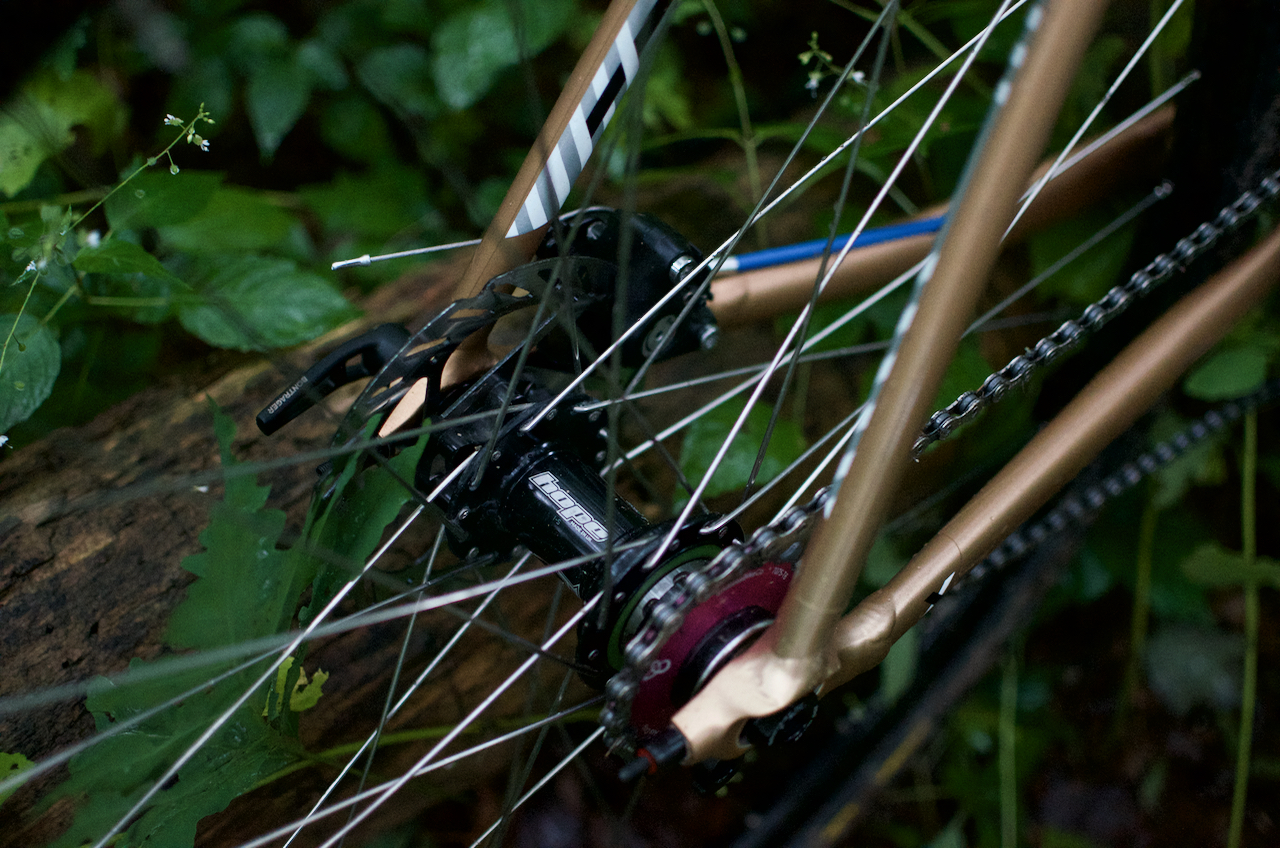 What an evocative name. This is a piece of tech I can absolutely get behind. I was already eyeing this dropout on last year’s fatbikes with envy. It’s such an excellent singlespeed dropout. Your rear wheel stays completely locked in, with no chance of slipping, and you can dial in your chain tension like you’re tuning a violin. No more track slack! 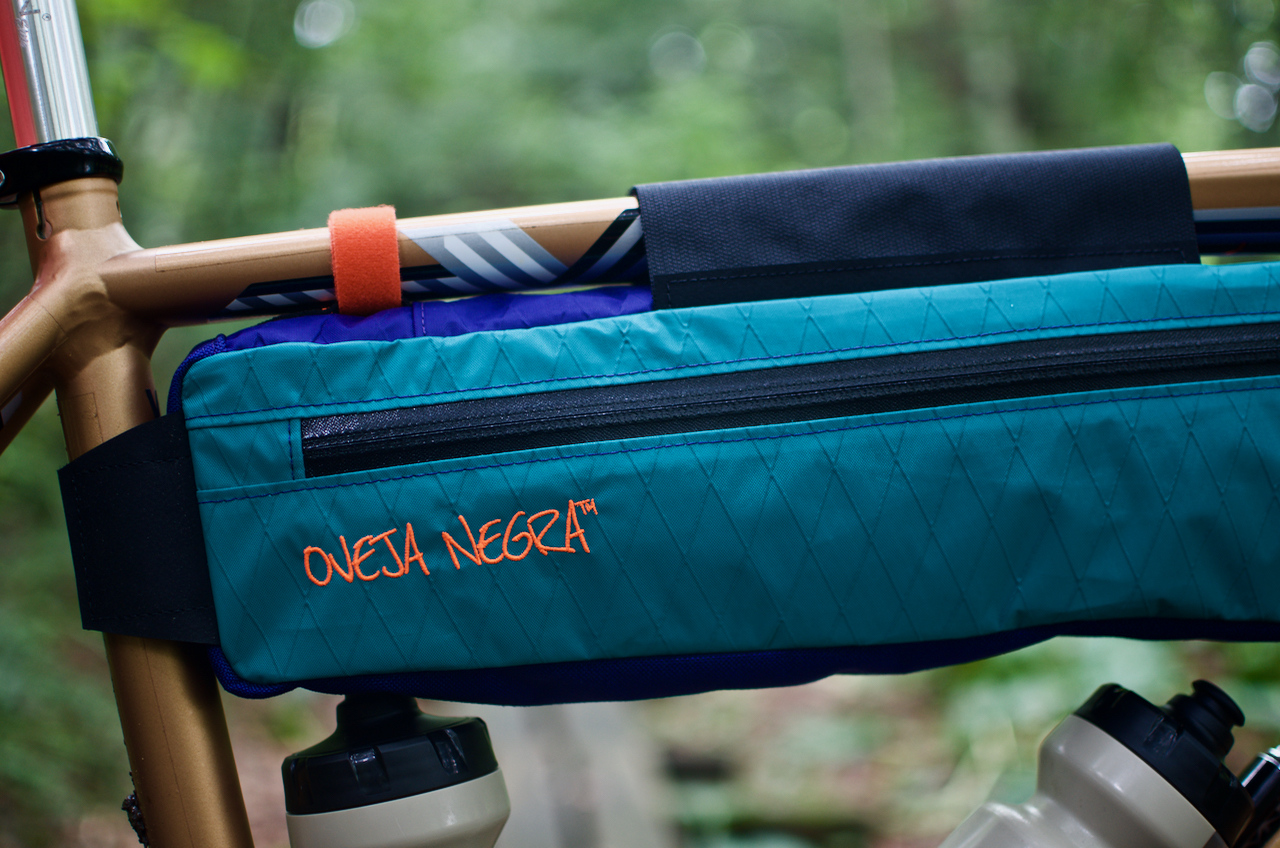 As icing on the cake, I picked up a retro-colorway Oveja Negra 1/2 Pack. This is actually my third one – I keep giving them away to friends. You can pry this purple and teal one out of my cold, dead hands, though.

Everything is set up just the way I like it, and I’m putting down 30+ miles a day just rolling around on all the little trail systems scattered through Western Mass. I’ll pick up some side-loading water bottle cages and take my time getting to know this frame. 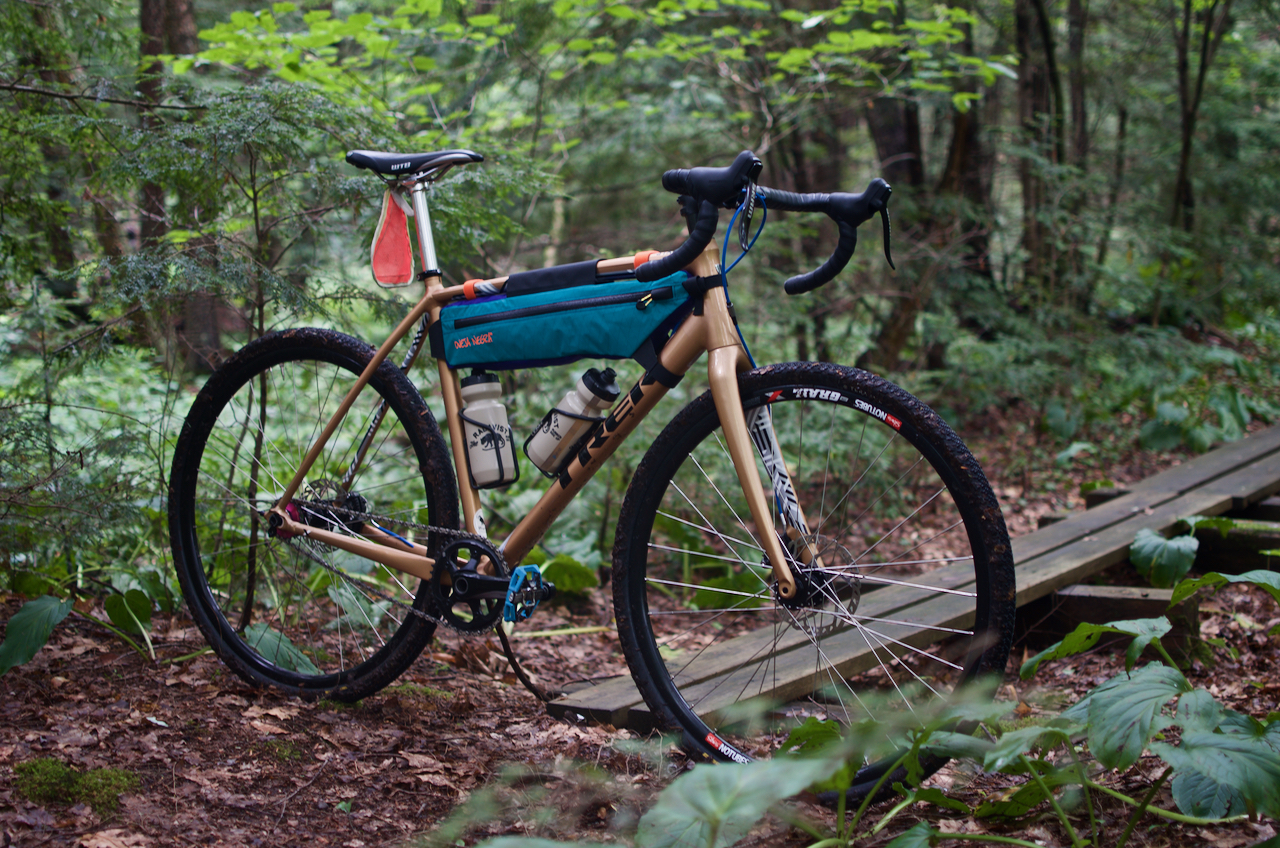 Top 5 Posts Of All Time

Time To Lube Your Chain